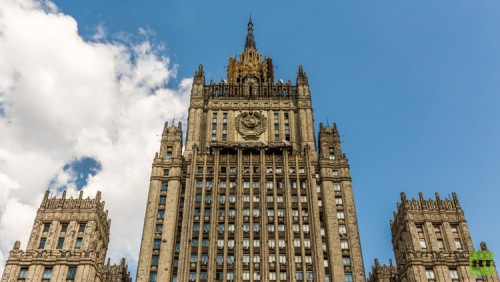 Russian Deputy Foreign Minister Igor Morgulov announced that the statements by US Secretary of State Rex Tillerson that Moscow allegedly fails to fulfill international sanctions against North Korea are unfounded and Russia honors its obligations in full.

"These accusations made by the United States are absolutely unfounded," the diplomat told TASS on Thursday.

"Russia is fulfilling its obligations under the corresponding UN Security Council resolutions in full," Morgulov said, adding that "The relevant UN Sanctions Committees do not set any claims to us [with regard to fulfilling the sanctions against North Korea]".

The US Secretary of State earlier alleged Washington had proofs that Moscow was not fulfilling all the sanctions imposed on Pyongyang, specifically, with regard to fuel deliveries.

Tillerson said Washington has evidence that North Korea is beginning to feel real damage from the sanctions placed against Pyongyang.

"We’re seeing it in some of the intel, we’re seeing it through anecdotal evidence coming out of defectors that are escaping… we’re getting a lot of evidence that these sanctions are really starting to hurt," Tillerson added.

Tillerson highlighted the extraordinary support China is providing in the implementation of sanctions against North Korea.

"We’ve never had Chinese support for sanctions like we’re getting now, Russia is a slightly different issue, but the Chinese have leaned in hard on North Korea," he underscored.

US President Donald Trump has also stressed that Russia is hindering progress related to the United States' global campaign to maximize pressure on North Korea in order to achieve denuclearization of the Korean Peninsula.

Trump added that Russian President Vladimir Putin could do more to help with North Korea, but because the US relations with Russia have frayed since the 2016 election investigation, the Kremlin is not doing as much as it could.

Kremlin Spokesman Dmitry Peskov had stressed that Russia may become a mediator between the US and North Korea only if it is necessary and the parties want it.

"We are talking about Russia's readiness, if necessary and if the two sides want it. It is impossible to become a mediator between the two parties based only on your own will, this requires the will of the two sides. Since the exchange of confrontational rhetoric is conducted precisely between Pyongyang and Washington," Peskov stated, when asked if Moscow is ready to become a mediator in the dialogue between the two states.

Defense Secretary Jim Mattis has repeatedly insisted that efforts to resolve the North Korea crisis should be diplomatically led, though he has said the Pentagon always plans for any contingency.

Tensions have been building on the peninsula following a series of nuclear and missile tests by Pyongyang as well as threats of war and personal insults traded between the US President and the North Korean leader Kim Jong-Un.

US decades-long military presence in and around the Korean Peninsula has forced Pyongyang to develop its ballistic missiles and nuclear weapons as a deterrent against Washington's aggression. The United States has thousands of troops in the region, partially in South Korea and Japan, and routinely threatens the North with military action to stop its weapons program.

Pyongyang has firmly defended its military program as a deterrent against the hostile policies of the US and its regional allies, including South Korea and Japan. North Korean officials have time and again accused their American counterparts of seeking regime change in their country.