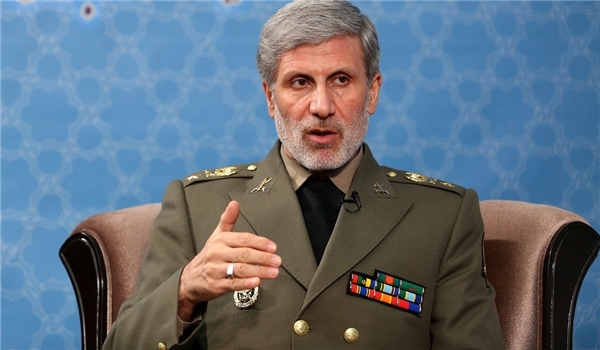 During the conversation on Sunday, General Hatami voiced regret over the death of hundreds of innocent Afghan people in the recent terrorist attacks, stressing, "Iran has always been concerned about foreign plots against the Afghan people."

He said that the Americans have created the ISIL to use them in Iraq and Syria, and added, "The US attempted to take the ISIL out of the battlefield after its heavy defeats in the two countries and transfer them to Afghanistan to justify its presence in Afghanistan with their shameless crimes."

General Hatami warned that the US is now pursuing plans to increase military forces in Afghanistan, and said establishment of security in Afghanistan is possible only through the regional states' positive approach and use of their common capacities to fight against terrorism.

In relevant remarks last Tuesday, Supreme Leader of the Islamic Revolution Ayatollah Seyed Ali Khamenei expressed deep regret over the massacre of the Afghan people in the recent terrorist attacks, blaming the US for the tragedies by transferring the ISIL terrorists to Afghanistan to guarantee its presence in the region.

"The US goal of transferring the ISIL terrorists to Afghanistan is justification of its continued deployment in the region and establishment of security for the Zionist regime," Ayatollah Khamenei said, addressing the Iranian seminaries in Tehran.

"The same hands which used the ISIL as a tool to oppress and commit crimes against the people in Syria and Iraq by its creation, is today after transferring the ISIL to Afghanistan after sustaining defeat in those regions, and the recent massacres are actually the start of this plot," he added.

Ayatollah Khamenei said that the US-backed terrorists don’t differentiate between the Shiites and Sunnis, and added, "The US wants this region not to see good days and wants the regional governments and nations to be busy with their own affairs so that they don’t think of opposing the evil agent of arrogant powers, that is Zionism."

He described the United States' other goal of creation of insecurity as justification of its presence in the region, and said, "The Americans, themselves, are the main cause for insecurity in Afghanistan and the killings in this region since 20 years ago under the name of religion were carried out, directly or indirectly, by the US agents, and they are now after guaranteeing their presence by fomenting insecurity and attaining their political and economic objectives."