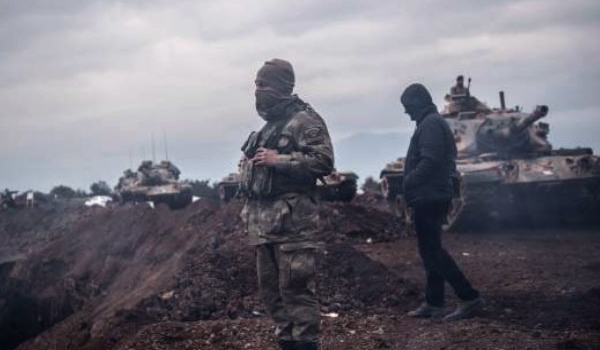 Fierce clashes between the Kurds and Turkish Army in Afrin region in Northwestern Aleppo inflicted hundreds of casualties on both warring sides, both Kurdish and Turkish sources reported on Saturday.

The Turkish Army General Staff announced in a statement that 340 Kurdish fighters have been killed in the Olive Branch Operation by its soldiers and Ankara-backed militants in Afrin region in the last seven days.

It further said that a number of Kurdish fighters' positions, trenches, bunkers and arms depots have also been destroyed in the operation.

"Three Turkish servicemen were killed during the country’s operations in Syria’s Afrin and 16 remain hospitalized," said a Spokesperson of the Turkish Health Ministry.

In the meantime, the Syrian Democratic Forces (SDF) announced that the Turkish army and its  allied militants have sustained 308 casualties, including four officers, during the clashes in Afrin region in the last seven days.

The SDF also confirmed the death of only 43 Kurdish fighters in Operation Olive Branch.

Yesterday, Ahmad Shoqi, a representative of the Kurdish fighters said that 16 Turkish military men have been captured by the Kurds in Afrin battlefield.

The Kurdish fighters said on Friday that they have captured 16 Turkish soldiers in clashes in Afrin, where Ankara and allied Free Syrian Army militants have been conducting an operation codenamed Olive Branch since January 20.

He also noted the reduction in the number of Turkish airstrikes in the area.