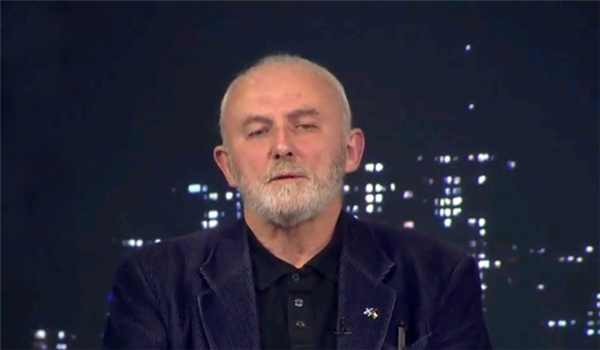 Human rights activist Mick Napier says Donald Trump’s announcement on the US recognition of Jerusalem al-Quds as the Israeli regime’s capital is intended to distract the public’s attention from his failures on the domestic front.

Mick Napier, in an exclusive interview with FNA, said that the al-Quds move is meant to distract attention from Trump’s many problems at home, such as falling living standards, lack of health care, rising homelessness and unjust distribution of wealth.

According to the activist, the announcement on the US recognition of Jerusalem al-Quds as the Israeli regime’s capital roots in the unpopular US President Trump intentions to divert the public attention from his failures at home and also give some satisfaction to the white nationalist element of his electoral base.

Mick Napier is an activist and campaigner for the rights of Palestinians. He is a founding member of the Scottish Palestine Solidarity Campaign and has been interviewed by international news outlets such as Press TV and Al Jazeera English to comment on issues related to Palestine.

FNA has conducted an interview with Mick Napier about Trump’s announcement on recognition of Jerusalem al-Quds as the capital of the Israeli regime and possible motives behind the move.

Below you will find the full text of the interview.

Q: US President Donald Trump recognized Jerusalem al-Quds as the capital of the Israeli regime in defiance of all global warnings. Why do you think he decided to go ahead with the move?

A: It’s not always possible to discern a rational motivation behind Trump’s actions – they are often far from transparent but in this case it stems from the desire of the increasingly unpopular President to give the white nationalist element of his electoral base some satisfaction by attacking the UN in support of the settler colonial State of Israel.

Q: The US ambassador to the United Nations, Nikki Haley, warned UN members that she will be “taking names” of countries that vote to reject Donald Trump’s recognition of Jerusalem as the capital of Israeli regime. How do you explain this warning that many see as an act of bullying against members of the international body?

A: Once again, it’s driven by US domestic political considerations. Unpopular leaders sometimes try to benefit from a war to distract their public’s attention from problems at home; attacking the UN is a weaker kind of surrogate to channel anger abroad and away from a society in crisis over falling living standards and lack of health care for millions, rising homelessness and a political class that has just carried out a $1.5 trillion redistribution of wealth in favour of the wealthiest layers of society.

Q: Many believe that this move by Trump has effectively killed fantasies that Washington is a neutral party in the Palestinian-Israeli conflict. How do you think that would play in the future developments surrounding the issue?

A: It has been clear for a very long time for all to see that the US and Israel act as a duo against the Palestinians, and the wider interests of the people of the Middle East. Only someone willfully blind could ignore the intimate collusion. Only a significant regional and international shift in the balance of power – politically militarily, diplomatically, economically - away from Israel will open up prospects for Palestinian freedom and security from dispossession and expulsion.

Q: Israel seized and occupied the entire West Bank, including East Jerusalem, during the war of 1967. The Geneva Convention holds it unlawful for an occupying power to transfer its own population into the territory it occupies and it is also prohibited by the convention to establish settlements and confiscate or annex the occupied land. Settlement expansion and Judaization of Jerusalem have been ongoing trends in Israeli policy. Although too quick to act in some cases, the international community seems to be very patient (if not indifferent) when it comes to Israel. How do you explain the inaction?

A: In 1986 the International Court of Justice at The Hague found in favour of Nicaragua’s claim of “state terrorism” against the United States – the US ignored the legal decision, defying the Court’s decision that it had to pay reparation to Nicaragua. Israel defies international law concerning Jerusalem, the territories conquered in 1967, transferring Palestinian prisoners into Israel and much more. Israel defies the 2004 decision of the ICJ on its illegal Wall and continues to insist that a part of Syria is now part of Israel.

Israel has been rewarded with lavish aid from the USA ever since 1967, and has been treated as a favoured part of Europe by the EU and its institutions, despite ever-growing popular hostility towards Israel.

The fall of the Shah in 1979 removed Iran as the other major local enforcer of US and European interests in the region. Israel smashed Arab nationalism in 1967 and defeated for a generation the threat that the resources of the region could be used for the benefit of the peoples of the Middle East. Despite reverses on the battlefield in Lebanon in 2006, Israel remains the West’s only candidate for the role of ultimate local enforcer of Western interests today.

Q: How does the international community accept and recognize an Israeli state while the apartheid regime has scoffed at the notion that it owes any obligation whatsoever to international laws?

A: The US and the major European states have a history until the present day of invading and dominating numerous countries, most recently Iraq and Afghanistan. International law is the merest fig leaf that can be discarded when it is convenient to do so. One example was Britain’s ethnic cleansing of the entire population of Diego Garcia to allow the USA to establish an air base there.

Q: In a review of the not-very-long history of the Israeli regime, we even see occupation and annexation of Egypt's Sinai Peninsula and Syria's Golan Heights, meaning it was not only Palestine being targeted by Israeli land grab policies. Doesn’t that tell the countries of the world and specially the neighboring states that they need to unite and react to Israeli expansionist policies?

A: Zionist ambitions have never been restricted to Palestine. Ben Gurion said he would “accept a state in the boundaries fixed today — but the boundaries of Zionist aspirations are the concerns of the Jewish people and no external factor will be able to limit them.” The more Israel expands and grows the higher will be the human cost of ending its expansionist drive. A few days ago Fr Manuel Musallam, a member of the Christian-Islamic Committee in support of Jerusalem and the Holy Places, warned that what has happened in Jerusalem will spread to Mecca. He is warning all concerned to act against Zionist expansionism before the human costs rise exponentially.

Q: The mainstream media has been mostly siding with Israel or ignoring the crimes committed by the Israeli regime. Many believe that the emergence of social media networks has played an important role in awakening the public opinion and shifting the focus on crimes and atrocities committed by the regime. How much of a role do you think this new phenomenon has played in this regard?

A: It has played a very significant role; at least for the foreseeable future social media can play a role of helping to share information and organize resistance. The mainstream media is very disciplined in defence of Israel but social media is largely enemy territory for the pro-Israel groups despite their lavish financing of propaganda in those media.