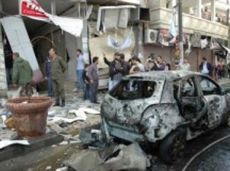 Four civilians were killed and six were injured in terrorist mortar attacks on neighborhoods in Jaramana, Kashkoul and al-Dukhaniyeh  in Damascus Countryside.

A source at Damascus Countryside Police Command told SANA's correspondent that more than 20 mortars were launched by terrorists on the neighborhoods of al-Wehda, al-Homsi and al-Baidar in the aforementioned towns, claiming four lives, injuring six, and causing material damage to homes, shops and cars.

Meanwhile, Four civilians were killed and 30 were injured in a terrorist car bomb attack which took place on Monday in al-Ushaq Street in Ekrema neighborhood in Homs city.

A source in Homs province told SANA's correspondent that terrorists detonated a car bomb which was parked near a cosmetics shop in the aforementioned area which is very crowded, with the explosion claiming four lives, injuring 30, and causing great damage to houses, shops and cars in the neighborhood.

Terrorists fired mortar shells on residential neighborhoods in Homs, claiming the lives of four citizens and injuring 27 others.

A source at the province told SANA that terroristsfired mortar shells on the neighborhoods of al-Hamar, al-Ghouta, Karm al-Shami, al-Ensha'at, Wadi al-Dahab and al-Ehram, claiming the lives of four citizens and injuring 22 others, in addition to material damage to the houses and cars in the site.

The source added that terrorists fired other two shells on Ekrema and Karm al-Lauz neighborhoods, injuring 5 citizens and causing material damage to the site.