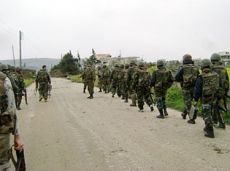 Army units on Tuesday continued wide military operations against terrorists' gatherings, eliminating armed terrorist groups and destroying their dens with all weapons and ammunition in side in several areas around the country

Numbers of terrorists were killed and others were injured as they army units targeted their gatherings and dens in Kweires, Erbid, Hayyan, Hilan, Hreitan, Babis, Kafr Hamreh, Khan al-Assal, al-Atareb, Kafrbisin, al-Sukkari and al-Mansoura in the city and countryside of Aleppo, according to a military source.

The source added that army units destroyed a number of vehicles along with the terrorists inside on Handarat-al-Jandoul axis and on Kafr Hamreh-Hritan axis.

In Idleb, army units targeted terrorists’ gatherings and dens in Abu al-Duhour town in the countryside, inflicting heavy losses upon them.

Army units in cooperation with national defense force skilled scores of terrorists who belong to "the Islamic State in Iraq and al-Sham" (ISSI) who belong to non-Syrian nationalities in an ambush on the road linking al-Bweir and and Rayyan in the eastern part of Homs countryside.

Army units foiled an armed terrorist group’s infiltration attempt from al-Dara al-Kabira into the safe areas in Homs countryside, killing and injuring a number of terrorists. A military source told SANA that other army units inflicted heavy losses upon the terrorists’ gatherings in the villages of Abu Hawadid, Um Sahrij, Rahhoum, Arshouneh and Sallam Gharbi in Homs countryside. SANA reporter said that another army unit destroyed, in an ambush, a car equipped with heavy machinegun, killed 7 terrorists and seized their weapons on the road between Ezz-Eddin-al-Rayan villages.

An army unit on Tuesday foiled armed terrorist groups’ attempt to infiltrate into the safe areas on Samlin Jasem road near Zimrin Samlin roundabout in Daraa countryside, killed and injured a number of terrorists.

The army thwarted another attempt by armed terrorist group to infiltrate the road linking al-Kark town and a military post, leaving the group’s members dead and wounded.

Other army units destroyed a den for terrorist groups and a number of vehicles in the surrounding of Atman town and Rusoum al-Mdawreh in al-Lajat region.