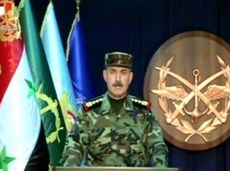 General Command of the Army and the Armed Forces announced that “After a series of successful operations, units of the Syrian Army, in cooperation with the civil defense, restored stability and security to Yabroud City and its surroundings in the northern countryside of Damascus.”

“Big numbers of mercenary terrorists who have been fortified in the city and used it as a passage for transferring weapons and terrorists into the Syrian interior were killed…and the Armed Forces are hunting the defeated terrorist gangs in the area,” the General Command said in a statement on Sunday.

“This new achievement that led to the collapse of the armed terrorist groups comes as a continuation of victories accomplished by the Syrian Arab Army in al-Qalamoun area against terrorists' gatherings and dens, and it also constitutes an important link in securing the border areas with Lebanon, cutting off supply roads and tightening grip on the remaining hotbeds of the terrorists in Damascus Countryside, as it also contributes to boosting the security of the international road between the central and southern areas,” it added.

The statement concluded by saying "As the General Command of the Army and Armed Forces stresses that expelling terrorism from Yabroud area and its surroundings is a fatal blow to the terrorists, their supporters and funders, it reiterates its determination to hunt the remnants of the terrorists and eradicate their roots, save the homeland of their evil and restore stability and security to all over the homeland."