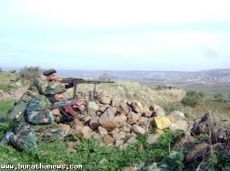 Army units intensified operations against armed terrorist groups on Tuesday that included clashes in various areas and destruction of heavy weapons in others during which many terrorists were killed.

An army unit clashed with terrorists in Daraya city in Damascus countryside, eliminating a number of them, while another unit destroyed terrorist hideouts in Khan al-Sheih and its farms.

Army units inflicted heavy losses upon terrorist groups in Yabroud area, destroying a number of vehicles along with the weapons, ammo and terrorists inside them.

Around Maaloula and near Jabaadin, army units carried out precise special operations which resulted in eliminating entire terrorist groups, while terrorist hideouts were destroyed in the twons of al-Mallaha and al-Muallaqa, Aliya farms, and al-Ebb farms in Douma area.

An army unit eliminated a number of terrorists from the Islamic Front in Adra workers city, including terrorist group leader Anas Rihan.

In Aleppo province, a military source told SANA reporter that units of the armed forces killed numbers of terrorists and destroyed their weapons and ammunition in the neighborhoods of Qadi Askar, Karam Mayssar and Karam al-Jazmati in the city of Aleppo.

Scores of terrorists were killed and others were wounded in the neighborhoods of al-Jandoul, Hanano, al-Marjeh, al-Jaoouz and Karm al-Daman in the city.

Army units eliminated several armed terrorist groups in the villages and towns of al-Jadideh, Kweiris, Erbid, on al-Shweikheh-Maaret Artiq axis and in the surrounding of Aleppo Central Prison.

Cars carrying terrorists and their weapons were destroyed in Azzan and the Industrial City.

In the same context, army units razed terrorists’ gatherings and dens in the towns of Nahleh and Kfarlata in Idleb, leaving many terrorists dead and wounded.

An official source told SANA that an army unit destroyed a car equipped with an anti-craft machinegun in al-Sinaa neighborhood in Deir Ezzor, killing a big number of terrorists, among them Osama al-Miza'l, Iyad Issa, Ammar al-Kanash and Akram al-Issa.

The source added that 4 terrorists were killed near the old Pullman Garage, while an army unit destroyed 4 cars with all the terrorists inside them near Ghassan Abboud roundabouts and a tunnel of 29 meter long which the armed terrorist groups had been using for smuggling and storingweapons and ammunition.

Terrorists were also eliminated in army operations targeting their hideouts in al-Qusour neighborhood and al-Waer area.

SANA reporter quoted a military source as saying that a big number of terrorists were killed in al-Karabis neighborhood and the villages of al-Dar al-Kabira, al-Khaldiyeh and al-Ghasbiyeh, among them Ghazi Dakhan, the leader of an armed terrorist group.

In another context, a number of terrorist handed themselves and their weapons over to the army in Jouret al-Shiyyah neighborhood in the city of Homs.

Terrorists were also eliminated in the towns of al-Naima, Atman, and al-Yadouda, where large amounts of weapons and ammo were destroyed including an anti-aircraft gun, a mortar launcher, and a rocket launcher.