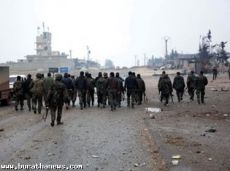 Units of the armed forces carried out operations against terrorists' dens and gatherings in several areas, killing and injuring scores of them, in addition to destroying their weapons and ammunition.

A military source told SANA that the army units killed all members of an armed terrorist group who were attempting to infiltrate from al-Nabi'a village towards a military checkpoint and destroyed a car along with the weapons and ammunition inside it in the area surrounding Atman town.

The source added that other army units targeted terrorists' dens in the villages and towns of Eyb, al-Jsri and Rajm al-Ghazlan, killing and injuring a number of terrorists.