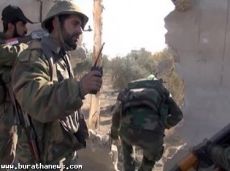 tweet
Units of the armed forces carried out operationsagainst terrorists' dens and gatherings in several provinces, killing and injuring scores of terrorists, some of them affiliated to Jabhat al-Nusra.

A military source said that an army unit ambushed an armed terrorist group affiliated to the "Islamic State in Iraq and al-Sham" and killed all its members who were attempting to sneak into Aqraba town in Damascus Countryside.

Units of the armed forces carried out operations against terrorists' gatherings in several areas of Damascus and its Countryside, killing many terrorists, including non-Syrians.

A source told SANA that an army unit killed all members of an armed terrorist group in Douma city in the countryside.

Among the dead terrorists were Nazeh al-Shumari and Masoud al-Soderi from Saudi Arabia.

The source added that another army unit destroyed a terrorists' den along with the weapons and ammunition inside it in al-Hajariyeh farms in Douma.

The source pointed out that an army unit clashed with terrorists to the east of the Water Establishment in Harasta, killing and injuring scores of them.

Meanwhile, the army units destroyed a den for Jabhat al-Nusra terrorists in Rema farms in Yabroud area and killed many of them, while another army unit clashed with terrorists in al-Jamiyat neighborhood in Maaloula city, killing and injuring scores of them.

In Afra mountains in al-Zabadani city, an army unit killed and inured a number of terrorists, including Yaseen al-Mallat.

Another army unit targeted an armed terrorist group to the east of the sewage establishment and near al-Othman Mosque in Adra area in the countryside, killing and injuring scores of them.

Scores of terrorists killed and injured in Homs

A military source told SANA that the army units killed and injured several terrorists in Bab Hud, al-Hamidiyeh, al-Qrabis and al-Waer neighborhoods in the city of Homs and destroyed a number of their dens in al-Dar al-Kabira, al-Ghanto, al-Khalidiyeh and al-Habra villages in the countryside.

The source added that the army units killed all members of an armed terrorist group while they were attempting to sneak from al-Qarabis neighborhood into al-Waer farms.

Another army unit killed scores of terrorists who were attempting to infiltrate from al-Hosn town into Talkalakh and destroyed their weapons and ammunition.

Units of the armed forces carried out operations against terrorists' gatherings and hideouts in Aleppo, inflicting heavy losses upon them.

A military source told SANA that the army units carried out a number of special operations which resulted in the killing and injuring of several terrorists in the industrial area, al-Kastilo-al-Ereimeh road, Mare', Daret Ezzeh, Tal Refaat, al-Wdeihi and Mayer in Aleppo countryside.

The source added that other army units destroyed weapons and ammunition loaded in terrorists' cars in Hretan, Andan, Bnan, Khan al-Assal, the area surrounding the Central Prison and near al-Kindi Hospital.

The source pointed out that another army units killed all members of two armed terrorist groups in Bani Zaid and Qadi Askar neighborhoods in the city.

Units of the armed forces killed a number of Jabhat al-Nusra leaders in al-Zafarani village in Idleb and destroyed 3 cars loaded with weapons and ammunition.

Meanwhile, other army units eliminated a number of terrorists in Kfar Najd and M'ar Shamsha towns and in the area surrounding al-Arbaen mountain, in addition to destroying a number of their cars and dens along with the weapons and ammunition inside them.