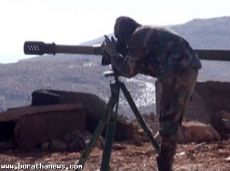 Units of the armed forces on Wednesday clashed with terrorists in a number of areas in Idleb countryside, killing scores of terrorists and destroying their hideouts and gatherings.

The source added that the army also destroyed machinegun-equipped vehicles in the areas of Taftanaz, Binnesh, Sarja and Tarmla, killing a number of terrorists, including Farhan Othman from Saudi Arabia, Mousa Naddaf Tabash from Morocco and Mohammad al-Obeidi from Kuwait, in addition to terrorists Adnan Mohammad Rankous and Mohammad Ali Zahlawi.

Units of the armed forces carried out operations against terrorists' dens and gatherings in Douma, Joubar, Rema farms and Maaloula in Damascus Countryside.

A source told SANA that the army units killed a number of terrorists in al-Hajariyeh and Aliyeh farms and destroyed a den along with the weapons and ammunition inside it in Douma.

The source added that an army unit hunted down terrorists to the east of Joubar neighborhood and killed a large number of them, while another army unit stormed two dens of Jabhat al-Nusra terrorists in Rema farms in Yabroud area, killing all terrorists inside them.

Other army units clashed with armed terrorist groups in the area surrounding al-Safir Hotel in Maaloula, killing and injuring scores of terrorists.

Units of the armed forces carried out operations against terrorists' dens and gatherings in several areas of Aleppo and its countryside, inflicting heavy losses upon them.

A military source told SANA that the army units stormed terrorists' dens in the area surrounding the Central Prison of Aleppo, al-Kindi Hospital and to the north of al-Nayrab Airport, while another army unit destroyed cars loaded with weapons and ammunition near al-Jandoul and Boaaden roundabouts, the area surrounding Minngh Airport, Hratan, AndanHadaden and Deir Hafer.

The source added that other army units eliminated terrorists in the area surrounding Aleppo Castle, the old city and the neighborhoods of Salaheddin, al-Sukari, al-Ansari and Bustan al-Basha, in addition to destroying their weapons and ammunition.

The source pointed out that the army units clashed with terrorists who were attempting to snaek into the safe areas at al-Sheikh Maqsoud neighborhood, killing and injuring scores of them.

Meanwhile, other army units killed all members of an armed terrorists groups near Binish town and destroyed a car equipped with heavy machinegun.

The army units continued operations against the terrorist groups in Homs, killing scores of terrorists and destroying their weaponry and munitions.

A military source told SANA that the army targeted terrorists' gatherings in the areas of al-Hamidyeh, al-Wa'er and in al-Rastan city, adding that other units attacked a terrorist group in the area of Jib al-Jarrah in Homs eastern countryside.

Scores of terrorists were killed during the operations and their weapons and ammunition were destroyed.

Meanwhile, other army units killed all members of an armed terrorist groups in Termaleh in Homs