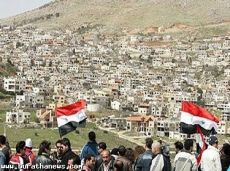 tweet
Syrian citizens in the occupied Syrian Golan affirmed commitment to their Syrian Arab identity on the 32nd anniversary of the Zionist Knesset evil decision to annex the Golan to its entity.

The Syrian citizens Saturday issued a statement rejecting the Israeli decision, showing determination to resist the occupation and its decisions aiming at distorting the civilized, cultural features, confiscating the land, water and applying the Israeli null laws on the Golan.

"We aspire with big longing to the day of liberation at the hands of the Syrian Arab army under the leadership of President Bashar al-Assad," the statement said.

It affirmed full support to the national document issued by the meeting of the Muslim Muahideen Aqel Sheiks in Lebanon and Syria held in Jabal al-Arab which expressed belonging the homeland, and that Golan is part and parcel of Syria.

The Israeli occupation authorities on December 14th, 1981 applied the decision of annexing the Golan when the Syrian citizens rejected the Israeli identity and held broad popular protests.