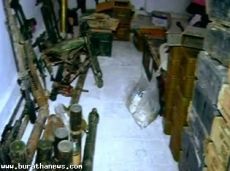 Leader and members of terrorist groups killed in Damascus

An army unit killed members of an armed terrorist group to the east of Bustan al-Basha in Barzeh neighborhood in Damascus.

The body of the terrorist nicknamed 'Adu Arab', who is the group's leader, was identified among the killed terrorists.

Army units killed and wounded terrorists and destroyed weapons and ammunition in a series of operations against their gatherings in al-Qalamoun, Douma, Darayya and Barzeh neighborhood.

An official source told SANA that army units eliminated a number of terrorists and injured others near the Oxygen factory in Rima farms southwest of al-Nabek city and destroyed their weapons and ammunition.

In Douma, an army unit carried out a quality operation that resulted in destroying a den for an armed terrorist group with the weapons and ammunition inside. Among the dead terrorists were Ibrahim Ismail and Abdul-Aziz Shehedeh, as another army unit targeted a terrorists' concentration in Alia farms and killed several terrorists, among them Youssef Jawhar and Ali al-Dabb.

The source pointed out that several terrorists have been killed in al-Jami'yat neighborhood in Darayya city, among them a terrorist called Omar and another called Mohammad.

Army units pressed ahead with operations in Barzeh neighborhood and eliminated an entire terrorist group. Among the dead terrorists were Mosab Salameh and Ammar al-Bitar.

Many terrorists were killed and others were injured as army units foiled their attempt to infiltrate from al-Sweiqa in the Old City in Aleppo into safe neighboring areas.

An official source told SANA that army units destroyed terrorists' dens and gatherings in the towns and villages of al-Wdahi, Arbed, kweirs, Kaskis, Handarat camp and al-Awaiyjeh, killing and injuring scores of them.

Other army units killed all members of amed terrorist groups in the area surrounding the Central Prison and al-Kindi hospital.

The source added that the army units destroyed cars loaded with weapons and ammunition in al-Bab city and in the villages and towns of Qadi Asskar, Tadef, al-Haydariyeh, al-Aiss and al-Sheikh Said.

In Aleppo city, the army units killed scores of terrorists in Bustan al-Qaseir and destroyed a number of terrorists' cars loaded with weapons and ammunition at the city's southern entrance.

Army units killed a number of terrorists and destroyed several of their dens in the neighborhoods of al-Qusour and al-Waer in the city of Homs, according to a military source

The source told SANA reporter that other terrorists' dens were destroyed in the villages of al-Ghasbiyeh and al-Khaldiyeh in the countryside.

Units of the armed forces carried out operations against terrorists' dens and gatherings in Homs, killing and injuring many of them.

A military source told SANA that the army units killed all members of an armed terrorist group in al-Khaldiyeh neighborhood.

The source added that other army units restored a number of cars and tanks loaded with gas , which were stolen by terrorists in al-Tefor area on Palmyra-Deir Ezzor road.

A military operation was launched against terrorists' dens in the surrounding area of al-Arba'een Mountain, al-Mistreeha and Tal al-Daman in Abu al-Dohour in Idleb countryside.

Army units killed terrorists in the neighborhoods of al-Hamidieh, al-Rushdieh and al-Jbeileh in Deir Ezzor city

An official source told SANA that most of the killed terrorists were of non-Syrian nationalities, among them Mohammad Salim BouEidein, a Tunisian, and Raed al-Naimi.