Many foreign terrorists killed in Army operations on Sunday 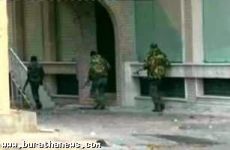 Army on Sunday carried out intensive operations in various areas across the country in which they eliminated a large number of foreign terrorists, including Turks and Arabs, and leader of the so-called "Islam Brigade" in Aleppo.

Terrorists killed, weapons destroyed in al-Nabek and other areas in Damascus Countryside

Army units carried out several operations in the surrounding of al-Nabek city and Rima farms in Damascus Countryside that resulted in destroying a car loaded with weapons and ammunition and a 23 mm anti-aircraft gun and killing a number of terrorists, according to an official source.

In Douma area, a terrorists' den was destroyed along with the weapons and ammunition inside and several terrorists were killed in Alieh and al-Ebb farms. Alaa al-Halbouni and Abdullah Kilani were among the dead.

An army unit clashed with a terrorist group in Harasta, killing a number of its members, including Hatem Rajab, while a heavy machine gun mounted on a car was destroyed in Joubar neighborhood.

Members of an armed terrorist group were killed and injured in the western mountains of al-Zabadani city. Terrorist Ismael Nor-Eddin was identified among the dead.

In Damascus city, units of the armed forces continued chasing down armed terrorist groups in Barzeh neighborhood and killed many of their members, including Mohammad al-Barghouth and Tahssin Dalwan.

Army units foiled terrorists' attacks against al-Kindi Hospital, killed many terrorists and injured others in operations against their gatherings in Aleppo and its countryside.

The body of the terrorist Khaled al-Ibrahim, the leader of the so-called Islam Brigade' affiliated to the so-called 'Islamic Ahrar al-Sham Movement', was identified among the killed terrorists, who tried to infiltrated into al-Kindi Hospital, in addition to all of his group's members

A military source told SANA that a number of cars loaded with weapons and ammunition were destroyed on Atareb-Aleppo road, while armed terrorist groups were eliminated in the surrounding area of the Central Prison, al-Wdeihi town, Kastillo Road, Khan al-Asal, Erbid, Jreidiet Kweiris and Kafr Hamra.

Army kills terrorists, including many foreigners, in Idleb

Foreign terrorists, including from Chechnya and Libya were killed during the army's operations in several towns and villages in Idleb.

A terrorists' weapons cache and den to the north of the museum in Maaret al-Numan city were destroyed, with army soldiers killing all the terrorists inside the den, a military source told SANA.

Most of those dead were of the Saudi, Afghan, Yemeni, Turkish and Libyan nationalities, the source added.

Units of the armed forces eliminated armed terrorist groups to the west of Abo al-Duhour, Saraqib, Kafrhaya and Sahl al-Rouj.

Large amounts of weapons and ammunition were destroyed in the operations.

Army units repelled terrorists who were trying to attack an army checkpoint to the west of Idleb city, killing all of them. Adam Khalil from Chechnya and Mutaz Billah from Libya and were identified among the dead, in addition to terrorists Saad-Eddin Abo al-Kheir and Mohammad Muaz.

In Hasaka, an official source told SANA reporter that a unit of the armed forces thwarted an attempt by an armed terrorist group to rob the wheat silos in Sabah al-Kheir area in the southern countryside.

Most members of the terrorist group were killed, while their weapons and ammunition were destroyed, according to the source.

Another army unit inflicted heavy losses upon terrorists in an operation targeting one of their dens in Tal Barak area in the northern countryside.

In another context, the authorities foiled a terrorists' attempt to blow up a 15 kg explosive device planted near al-Quds Park in Ferdouseh Street in central Hasaka.

Units of the armed forces targeted armed terrorist groups in Bab Hud neighborhood, al-Khaldiyeh village in al-Dara al-Kabira and to the west of the post office in al-Rastan, killing and injuring a number of terrorists.

An army unit foiled an armed terrorist group's attempt to infiltrate from al-Ghasbiyeh village into al-Rwair crossroads, killing a number of terrorists and injuring others.

An army unit targeted terrorist gatherings and hideouts in the neighborhoods of al-Huwaiqa, al-Jbaileh, al-Arsi, al-Hamidiye, al-Sheikh Yassin and al-Rushdiye in Deir Ezzor city, destroying their weapons and ammo.

An army unit eliminated members of a terrorist group belonging to Jabhat al-Nusra in the village of Beit Shurouq in Lattakia's northern countryside, including the three Qatari terrorists called Yousef, Ali and Hussein Badawi.

Another unit confronted a terrorist group which was attempting to move towards al-Nabi Eshea Mountain, leaving the terrorists dead or injured.