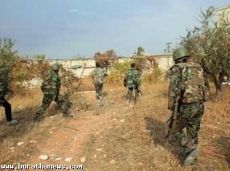 The army on Saturday foiled infiltration attempts by terrorists from across the border and truck bomb and explosive device attacks and inflicted heavy losses upon the terrorist groups' ranks in various areas.

A series of successful precise operations were carried out in various areas in Damascus Countryside, resulting in the killing of numbers of terrorists and the destruction of many of their dens.

SANA reporter quoted an official source as saying that most members of an armed terrorist group were killed in Yelda town in the southern countryside of Damascus. Among those were Ahmad Ashour and Eyad al-Halabi.

The army operations in Bibila town resulted in killing numbers of terrorists and destroying their weapons. Ayman Hammoush and Mohammad al-Otani were identified among the dead.

In the eastern Ghouta, army units carried out a series of operations in which they destroyed a weapons cache and killed 15 terrorists from the so-called "Ahfad al-Rasoul Battalion" in al-Nashabiyeh farms. Jamal Abo Bakr and Ahmad Jum'eh were among the dead.

Members of an armed terrorist group were killed and injured in the farms of Deir Salman farms. Ghaith Jum'eh was among the killed terrorists.

According to the source, large amounts of weapons and ammunition hidden in a terrorists' den were destroyed in the farms of al-Mleiheh town, in addition to the killing of a number of terrorists, including Mousa Shalhawi.

A sniper was killed near the electricity plant in Adra, while two terrorists' cars were destroyed to the east of the Central Prison of Adra.

An army unit, the source said, destroyed a car loaded with weapons and ammunition and killed all the terrorists inside it in Zamalka, while another army unit killed 6 terrorists in Joubar neighborhood.

Two members of an armed terrorist group were killed in the framework of chasing the group in the city of al-Zabadani. The two terrorists are Abdullah al-Dalati and Walid al-Laham.

An army unit razed a gathering of Jabhat al-Nusra terrorists in Yabroud farms, killing many of them, including Ahmad Abdul-Aal.

Tens of terrorists were killed or injured during a series of operations carried out by the army units in the areas of al-Nabek, Reema farms, Deir Atyeh and Rankoos.

Units of the armed forces made a progress in chasing the terrorists in al-Zebdiyeh neighborhood in the city of Aleppo having killed all members of armed terrorist groups that had been positioned in a number of residential buildings in the neighborhood, according to a military source.

The source told SANA reporter that an army unit killed and wounded members of armed terrorist groups after hunting them down in al-Sheikh S'eed area.

The source also mentioned that units of the armed forces destroyed a number of terrorists' cars and gatherings align with their weapons and ammunition on al-Mislmiyeh road and in the areas of al-Kastello, Africano, Kafer Dael, al-Kallaseh, Bustan al-Qasr, Bani Zeid, al-Shweihneh, Mare', al-Rashdin and the old Aleppo.

A military source said that the army targeted terrorists' gatherings in many areas in Idleb countryside, killing scores of terrorists and destroying their weapons and ammunition.

The source told SANA that the army destroyed a terrorists' gathering in the area of al-Badryeh in Areha, killing and injuring a number of terrorists and destroying a weapons vehicle.

The army units clashed with terrorists in the areas of Bazabour, Jabal al-Arba'een and Bennish, killing a number of terrorists, among them were terrorists of non-Syrian nationalities

A clash erupted among terrorist groups, one of them affiliated to the ISIS "Islamic State in Iraq and Sham" in the town of al-Najyeh in Jisr al-Shughour countryside, with many terrorists killed and injured during the clash, among them was Abu Ayman al-Iraqi.

With the help of locals, an army unit eliminated 25 terrorists in the village of Mseibin, including Mustafa Anwar Tekko and Jalal Abdelhamid Tekko.

According to a military source, units of the armed forces killed scores of terrorists in al-Nazihin camp and Jordan Street in the city of Daraa. Terrorists Anas Mohammad Ghazi and Nizar Mohammad al-Zoubi were identified among the dead.

The source told SANA reporter the army units foiled the bomb attacks by terrorists as they dismantled several explosive devices the terrorists had planted in the abovementioned areas.

An army unit killed the leader of a terrorist group calling itself 'Al-Jihadiyeen Battalion' and a number of his group's members in Atman town, including Lu'ai al-Mitleq, Firas al-Sbeihi and Fahd al-Khalid. Two of the terrorists cars which were loaded with weapons and ammunition and a 23 mm anti-aircraft gun were destroyed.

Other units targeted terrorist sites and hideouts in the town of Nahita and Jabhat al-Nusra sites in the town of al-Shumara, eliminating and injuring a number of them and destroying two cars, one which equipped with a heavy machinegun, along with the terrorists inside them. Among the terrorists killed in these operations were Hussein al-Shalash, Ismael al-Qaddah, Hamed Majarish, Fadi al-Ali, and Ali al-Balout.

An army unit eliminated a group consisting of ten terrorists and their leader Wasef Ali Wasef in the village of al-Alali, while another unit repelled terrorists heading to the town of Mahajje from the town of al-Waridat, killing and injuring a number of them.

An attempt to detonate two explosive devices weighing 255 kg, planted near Martyr Ayham al-Ghazali school in Qarsa town was thwarted by a unit of the armed terrorist groups.

Units of the armed forces foiled an attempt by terrorists to cross Lebanon into the Syrian territories and killed and injured members of armed terrorist groups in various villages an town in Homs.

An official source told SANA reporter that army units, in cooperation with the border guards, repelled terrorists who tried to infiltrate from Lebanon into Syria through the sites of Edlin and al-Ghida in the countryside of Talkalakh.

The source confirmed that most of the terrorists were killed and injured.

Meanwhile, a truck loaded with tons of explosives was dismantled in the framework of the continued pursuit of terrorists in al-Hadath town in the eastern countryside of Homs, of which the army took control Friday.

The source also mentioned that an army unit killed all members of an armed terrorist group in Haret al-Turkman in the town of al-Hosn, a Tunisian terrorist nicknamed Abo Seif was identified among the dead.

A military source told SANA that the army destroyed a vehicle equipped with heavy machinegun and loaded with weapons and ammunition in al-Sha'er Mount in the area of Palmyra.

The source added that an army unit eliminated all members of an armed terrorist group in the area of al-Dweir in Homs countryside and seized their weapons and ammunition.

In the city of Homs, scores of terrorist were killed and others were wounded in a series of special army operations that targeted their gatherings in the neighborhoods of al-Qusour, al-Warsheh, Bab Hood and Jouret al-Shayah.