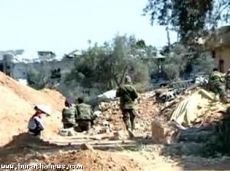 Army units on Sunday eliminated armed terrorist groups and foiled attempts of blowing up explosives and attacks on military checkpoints in several areas around the country.

The army units destroyed a terrorists' warehouse in the area of al-Badryeh in Idleb countryside, killing the terrorists in the place and destroying the weapons and ammunition in it.

Mortars, rocket launch pads destroyed in Aleppo and its countryside

Units of the armed forces carried out operations against terrorists' dens and gatherings in Aleppo and its countryside, killing and injuring scores of them.

A military source told SANA that the army units killed a large number of terrorists in the area surrounding the Central Prison of Aleppo, al-Kindi Hospital and the villages of Kfar Dael, Kubtan al-Jabal and to the east of Hreitan.

The source added that other army units destroyed a mortar in al-Dweirineh and a number of cars loaded with weapons and ammunition on al-Bab-Manbej road and near al-Dweirineh bridge, in addition to destroying rocket launch-pads and mortars in Kweiris and Arbid villages and killing many of terrorists.

In another context, clashes took place between a number of terrorist groups, some of them affiliated to the so-called "the Islamic State in Iraq and Sham" in al-Naqarein, al-Haidariyeh and Masaken Hanano.

The clahes resulted in the killing of several terrorists.

The source pointed out that a terrorists' infiltration attempt from al-Hardin village into Kanaker was foiled in a military operation, which resulted in killing most of the terrorists and seizing terrorists' passports that belong to Jordan and Tunisia, in addition to publications of Jabhat al-Nusra that include instruction on the way of manufacturing explosives, belts, bombs, dynamite and detonators.

A military source told SANA that an army unit killed all members of an armed terrorist group to the northeast of Rankous, in addition to destroying their weapons and equipment.Emad Raslan al-Beitar was identified among the dead.

In the Eastern Ghouta area, army operations near the towns of al-Qasimiya and al-Delba resulted in the death of terrorists Rateb al-Wazir and Khaled Maikeh, the injuring of others, and the destruction of their weapons and equipment.

In Aliya farms in Douma area, an army unit destroyed a terrorist hideout along with the terrorists, weapons and ammo inside it, including Ahmad Ajina.

An army unit eliminated 30 terrorists and destroyed their weapons northeast of Mesraba, and destroyed a terrorist hideout along with the weapons and ammo in it in the town of Medira, injuring a number of terrorists including Ahmad Samaan.

Other units destroyed terrorist gatherings in Ein Tarma valley, eliminating and injuring the terrorists inside them and destroying their weapons, ammo and vehicles.

Army units continued to advance in the town of al-Sbaineh, carrying out a series of precision operation which resulted in destroying terrorist hideouts and gathering, in addition to the elimination of a terrorist group leader called Ahmad al-Nmairi and several of his cohorts.

In Damascus' northern countryside, army units destroyed terrorist hideouts in the farms of Yabroud and the town of al-Sahel in al-Nabek area, eliminating a number of terrorists including Mazen Othman and Bilal Khadra.

Terrorists killed, their attempt of blowing up explosives foiled in Daraa

Army units killed several terrorists in Atman town on Damascus-Daraa road and foiled their attempt of detonating a number of explosives, in addition to destroying three machinegun-equipped cars.

Another army unit killed a number of terrorists in the surrounding area of al-Hamza Mosque in Daraa city.

units of the Syrian Arab Army destroyed terrorist dens and gatherings in the city and countryside of Homs, eradicating several terrorists and wounding others.

A military source told SANA reporter that units of the army eliminated a number of terrorists in Bab Hud neighborhood and pursued an armed terrorist group in al-Qusour neighborhood, killing and injuring many terrorists.

The source added that other army units inflicted major losses on the terrorist gatherings in al-Khaledieh, al-Dar al-Kabira, Kisin and Mahin towns in al-Rastan and killed a number of terrorists.

Terrorist hideouts were destroyed near Souq al-Hal and in Cinema Fouad Street, resulting in the elimination of terrorists Mohammad Hassan al-Jaber and Mohammad Farhan al-Sarhid.

Army units also advanced in al-Rashidiye neighborhood, eliminating terrorist groups which were holed up in the Faculty of Literature. Among the dead terrorists were Ahmad Hassan Majoun, Abdelhadi Mohammad al-Basis, and Jordanian Mohammad Fawzi al-Bornini.

An army units targeted a terrorist gathering in Tishreen oil field located on the road between Hasaka and al-Hol, eliminating 4 terrorists and destroying two cars equipped with heavy machineguns.