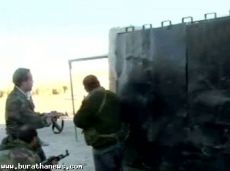 Army units on Wednesday pursued terrorists infiltrating into Sadad town, as they killed many terrorists, injured others and destroyed their cars loaded with weapons in several areas in Homs province.

An official source told SANA that an army unit hunted terrorists who infiltrated into Sadad town reaching al-Talla neighborhood, killing many terrorists and injuring others, in addition to destroying their weapons.

The source added that members of armed terrorist groups were killed in Jouret al-Shayyah and al-Qarabiss neighborhoods and near Khadija al-Kubra School in al-Qussour neighborhood in Homs.

The source pointed out that army units destroyed cars equipped with heavy machineguns that were transferring terrorists, weapons and ammunition in Sritel hill in Jabal al-Shaer area in Palmyra, while another unit killed members of armed terrorist groups near al-Dar al-Kabira and the surrounding area of al-Rastan city.

Units of the armed forces carried out operations against terrorists' dens and gatherings in Aleppo countryside, killing and injuring many of them.

A military source told SANA that the army units killed and injured many terrorists in the villages and towns of al-Jadyda, Kwaires and Rasm al-Aboud in the eastern countryside of Aleppo.

The source added that the army units also destroyed a number of terrorists' dens, gatherings, mortars, rocket launch-pads and large amount of ammunition.

The source pointed out that other army units destroyed two cars loaded with weapons and ammunition to the north of Deir Hafer and other 3cars on al-Bab-Aleppo road.

A unit of the armed forces killed all members of an armed terrorist group in the area surrounding Saraqib city and destroyed a number of cars loaded with weapons and ammunition.