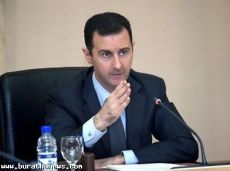 The Syrian President Bashar al-Assad asserted, in an interview with the Lebanese al-Akhbar daily, that Syria’s security and stability can be protected by politics over weaponry.

He reckons that international equilibrium is the best guarantee, citing the three Russian-Chinese vetoes during the Syrian crisis as proof.

The Syrian president does not regret giving up chemical weapons. He maintains that their capacity for deterrence has expired for three reasons:

First, Syria’s missile arsenal has made huge strides, so deterrence can now be established from the first moments of the war. This, he said, eliminated the need for chemical weapons, which can only be used as a last resort if the enemy deploys nuclear weapons.

Second, Assad continues, huge progress has been made in the past two decades in countering the military effectiveness of chemical weapons, meaning, their effect is largely psychological.

Third, chemical weapons are obsolete because the war is now internal.

The Syrian leader does not believe that Geneva II will be held, even if scheduled for November.

"Perhaps the proposed peace conference will be held only to appease Russia, which is seeking to ward off the specter of war."

Assad says that Syria has no qualms attending, and that its only demand is clear and based on two principles: elections and ending support for terrorists.

The West’s problem, according to the Syrian president, is that the faction it supports is fragmented and has no control on the ground.

"The Free Syrian Army (FSA) is almost done for," he says, "Its fighters have either abandoned it to join Islamic groups, or have joined the government and are now fighting in the ranks of the Syrian army."

Nothing is left of the forces supported by the West and the Gulf except terrorists, who have no place in Geneva II, Assad adds.

President Assad also considered that the foreigners are better than some Arabs.

“Not one Arab official has contacted us with a plan for mediation or for an Arab solution,” he added, "The Arabs were always only an echo of their Western masters, if not worse."

Assad emphasized that estrangement with Saudi Arabia and Qatar continues.

Commenting on the Syrian-Iraqi relations, Assad underscored that Iraq stance has been very good from the beginning.

"Damascus has been closely monitoring the situation in Egypt," the Syrian leader said.

Assad asserts, “Egypt is the fortress of the Arabs,” saying that relations with Egypt are today better than they were, even under former President Hosni Mubarak.

Regarding the estrangement between Hamas and the Syrian leadership, Assad holds that Hamas ultimately decided to abandon resistance and to fully merge with the Muslim Brotherhood.

“This was not the first time they had betrayed us. It happened before in 2007 and 2009. Their history is one of treachery and betrayal.”

Assad then wished “someone would persuade them to return to being a resistance movement,” but says that he doubts this will happen. “Hamas has sided against Syria from day one. They have made their choice,” he adds.

President Bashar al-Assad seems reassured by the progress of military operations. He says the war follows a hit-and-run pattern, where his army regains control of some territories while losing others, and so on. However, Assad adds, if we consider the general course things have been taking, we would find that the Syrian army is clearly advancing.