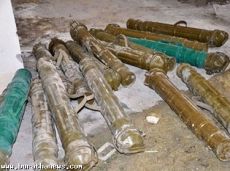 Army units carried out a series of qualitative operations against terrorists' gatherings and dens in eastern Ghouta and the southern and southwestern countryside of Damascus, killing and injuring many terrorists, among them non-Syrians.

An official source told SANA that an engineering unit neutralized two explosive devices weighing between 30-60 kg that terrorists planted near Toyota Company on Damascus-Homs road, in addition to confiscating several surveillance cameras, as a number of terrorists were killed near the water tank in Harasta, among them Abdul-Rahman Eyoun.

The source added that another army operation in al-Eb farms in Douma left a number of terrorists killed and others injured, among them Zakarayya Masarwa, as a den with the terrorists and ammunition inside was destroyed in Erbin. Mohammad al-Kadi and Abdul-Rahman al-Kalesh identified among the dead terrorists.

In Damascus southern countryside, army units carried out a series of operation in Hijjera and al-Ziabieh towns as a mortar cannon and heavy machinegun were destroyed in Hijjera.

An army unit killed four terrorists, among them one called ''Khaled'' in al-Alali area in Daraya city.

The source added that an army unit pursued a terrorist group in the farms surrounding Qatana city in Damascus southwestern countryside, killing several terrorists, among them Imad Zaino and Mohammad al-Masri.

A terrorists' gathering was destroyed in Khan El-Shieh area in Damascus southern countryside.

Citizens wounded of terrorists' shells on al-Qasaa in Damascus

An official source at the Police Command told SANA that a mortar shell fell on al-Zablatani and caused the injury of sveral citizens who were admitted to hospital.

The source added that others 3 shells fell on the same area, one of them fell near the water treasurer, the second one fell near the river, while the last one fell on a shrine, causing material damage.

The source pointed out that an engineering unit dismantled an explosive device attached to a private car in Kiwan area in Damascus.

Terrorists killed, among them non-Syrians, in Daraa

In a series of operations on Thursday in Daraa and surroundings, army units eliminated a number of terrorists of Qatari, Jordanian, Saudis, Libyan, Egyptian, Chechen nationalities.

A military source told SANA that the operations carried out by the army units in Daraa al-Balad, al-Jumrok, the area surrounding the National Hospital in Daraa, al-Naemeh farms and Tsil, Hit, al-Naserieh, Sahm al-Golan, Tafas, al-Shajara, and al-Agami in Daraa province resulted in killing and wounding a number of terrorists.

In Quneitra, the source noted that the army units destroyed two terrorists' gatherings in Rasm al-Shouli.

The competent authorities found a number of rockets with their launching base, computers, satellite transmitters in al-Qariateen town and the surrounding farms in Homs countryside.

SANA correspondent quoted a source in the governorate as saying that the inspection operations in area resulted in finding a warehouse for medical materials and a field hospital equipment stolen by terrorists from the state health establishments.

Fertilizer for manufacturing improvised explosive devices and a number of cars were also seized.

Army units destroyed gatherings and dens for Jabhat al-Nusra leaders in the towns and villages of al-Kabir, Burj Zahi and Job al-Ahmar in Lattakia countryside.

Big numbers of terrorists were killed and their weapons, including heavy machineguns, were destroyed.

Army units destroyed terrorists' gatherings and inflicted heavy losses upon them in several towns and villages in Idleb countryside.

A military source told SANA that an army unit eliminated terrorists and destroyed their weapons and ammunitions in Matram, Bsankoul, Bastamoun, al-Maghara, Maaret al-Nou'man and Has in Idleb countryside.

Units of the Syrian Arab Army eliminated terrorists concentrations in al-Kafar village in Ariha district, Idleb countryside, and killed a number of terrorists and wounded others.

A military source told SANA reporter that a unit of the armed forces continued pursuing terrorists in Idleb countryside and killed a large number of them, while another unit targeted terrorist concentration in Marian town.

The source added that another unit eliminated terrorists in Kafar-Najed town.

The Army advances in al-Khalediyeh neighborhood in Homs

The Syrian Arab Army continued pursuing the armed terrorist groups in Homs city and countryside, killing and injuring large numbers of them.

A source in Homs told SANA that the armed forces has made a considerable advancement in al-Khalediyeh neighborhood in Homs and eliminated a large number of terrorists.

the armed forces also destroyed several vehicles belonging to the terrorists in Talbiseh in Homs countryside in addition to killing and injuring several terrorists.

units of the Syrian Arab Army targeted terrorist concentrations in the areas surrounding the central prison of Aleppo, leading to killing and injuring large numbers of them.

An official source told SANA reporter that the operation led to destroying an anti-aircraft machinegun and other machineguns near al-Madafeh hil and the glass factory, in addition to destroying a booby-trapped car.

Another unit targeted a terrorist concentration in Ein Dakneh village and inflicted heavy losses on the terrorists.

In the southern countryside of Aleppo, units of the army eliminated a number of terrorists in the farms surrounding Khan al-Assal.

In Aleppo city, the armed forces clashed with terrorist groups in al-Rashidin neighborhood and eliminated many terrorists.

Units of the armed forces carried out operations against terrorists' dens and gatherings in Deir Ezzor city, inflicting heavy losses upon them.

An official source in the province told SANA reporter that the army units stormed terrorists' dens and gatherings along with the weapons and ammunition inside them in al-Sinaa, Al-Hamidia and al-Sheikh Yasin neighborhoods in Deir Ezzor, killing and injuring several terrorists.

The source added that the army units destroyed weapons, ammunition and vehicles which were used by terrorists in their acts of terrorism.