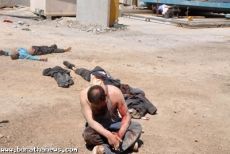 A military source told SANA that an army unit killed all members of an armed terrorist group who were attempting to ambush SANA Journalists at the entrance of al-Husseinia village in Homs countryside.

The army collected information on attempts to target SANA team by wiretapping terrorists' communication lines, which enabled them to foil the attempt, killing 6 terrorists, in addition to destroying their weapons.

The source added that another army unit killed a number of terrorists who were perpetrating acts of terrorism to the east of Jandar village, while the others escaped.

It pointed out that the army units killed 4 terrorists who were attempting to infiltrate into al-Amal Hospital in Jourat al-Shiyyah neighborhood in Homs city, in addition to seizing their weapons.