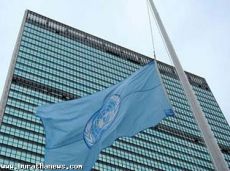 The United Nations on Saturday voiced readiness to facilitate launching dialogue between the government and the opposition to resolve the crisis in Syria.

In a statement, the UN said that Secretary-General Ban Ki-moon and UN Envoy to Syria Lakhdar Brahimi discussed in a meeting in Switzerland the recent statements by the Syrian government and the opposition which indicate a desire to launch dialogue.

The statement added that the UN welcomes this and will be prepared to facilitate dialogue between a delegation representing the opposition and a delegation from the Syrian government.

The meeting took place in Lausanne as part of annual meetings between Ki-moon and UN envoys tasked with 30 diplomatic or peacekeeping missions around the world.