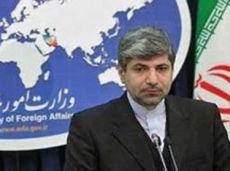 Iranian Foreign Ministry Spokesman, Ramin Mehmanparast, stressed that the best way for solving the crisis in Syria is through ending violence and adopting dialogue and elections.

In a televised interview broadcast by Iranian media on Tuesday that the Western countries that reject dialogue, support gunmen and want foreign intervention in Syria are trying to fulfill hidden agendas and goals.

On the other hand, the Iranian official pointed out that the Palestinian resistance confused the Zionists in eight –day period, forcing them to look for truce and submit to the condition of the resistance, adding that many Zionist ministers including the Israeli war minister resigned in the wake of the resistance's response to the Israeli aggression on Gaza.